Insights and resources
to help you thrive.
Now, more than ever, it’s vital to understand how the retail environment is changing and how to best adapt to succeed. We want to provide you with insightful data and resources that can help your business thrive!
What we see

We are a software company that provides an integrated point-of-sale system for thousands
of specialty retail shops throughout the United States. As such, we’re observing valuable trends and insights that we want to share with you. 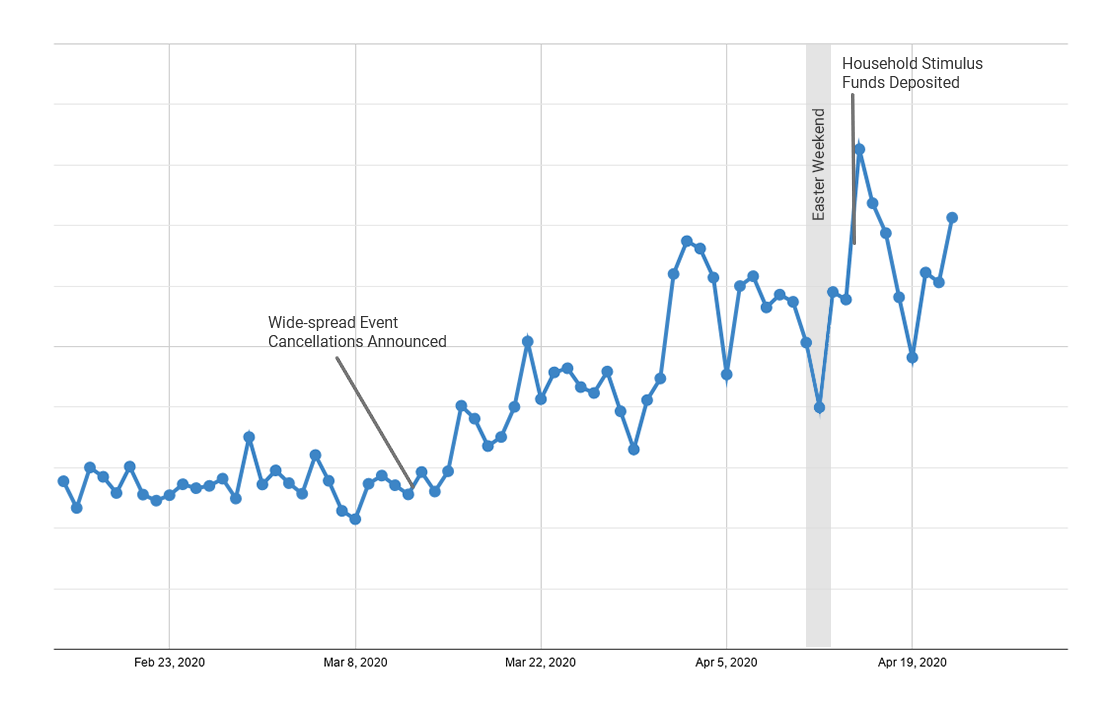 The Online Sales are Rising chart (above) shows the change in average number of online transactions per store across Rain’s thousands of specialty retail clients.

April 21, 2020:
One clear opportunity we are seeing for brick-and-mortar retail stores is the chance to help local consumers develop habits of engaging both online as well as in-store. These habits will pay dividends even after the COVID-19 crisis subsides.

Additionally, large online retailers such as Amazon as well as big box retailers are running short on some inventory. Opportunities currently exist for smaller retailers to get the word out to their local audiences about having various products and supplies in stock.

A substantial portion of the increased online transactions has been fueled by our curbside pickup feature. At this point, we strongly recommend all stores enable curbside pickup (if your state allows for it). 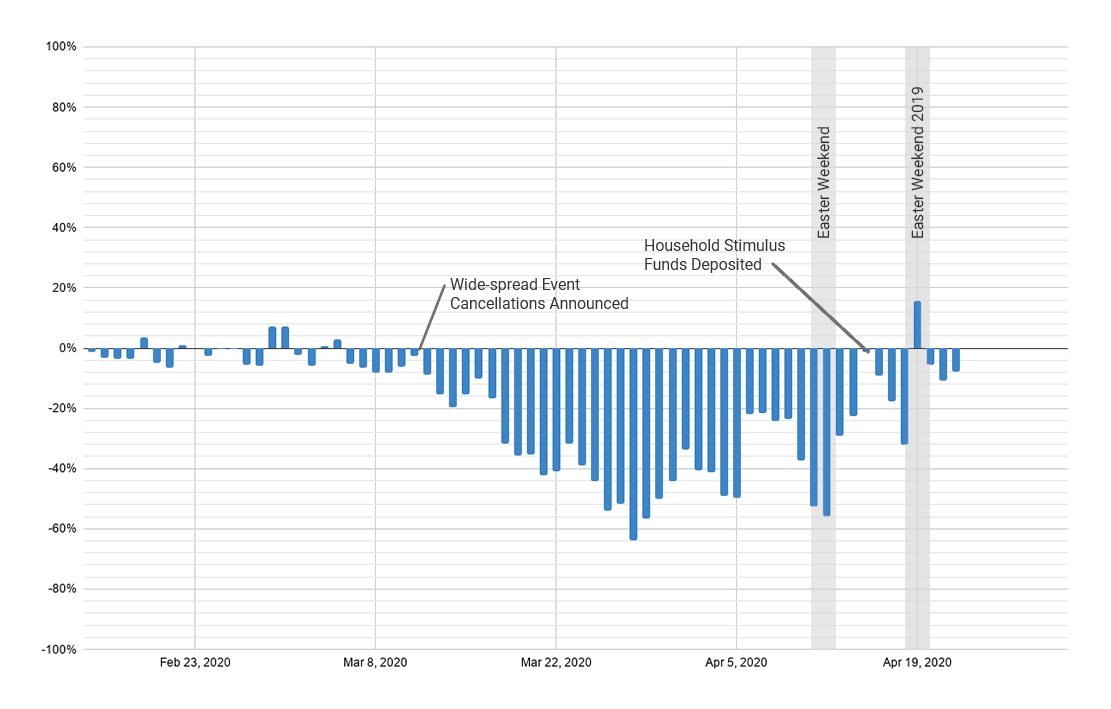 The Transaction Volume per Store: YoY Change chart (above) shows the average change in transaction volume per store across Rain’s thousands of specialty retail clients when compared to the same day of the prior year. Year-over-year comparisons are lined up by the day of the week. So, for example, the third Saturday in March of 2020 is compared to the third Saturday of March in 2019.

April 21, 2020:
Sunday, April 19th actually saw an increase in transactions per store compared to 2019. However, the third Sunday of 2019 was Easter Sunday, so this result is due to unique circumstances with how the year-over-year calendars line up.

With that said, the 9% year-over-year drop for Monday, April 20th is a very positive result. The last 4 weekdays all have a drop of less than 20% compared to last year. While the federal stimulus checks are likely to have played a role in this result, the consumer spending behaviors are nonetheless encouraging.

April 15, 2020:
Year-over-year transactions per store began to slip on March 6th with single digit percentage drops from the prior year. A week later, wide-spread cancellations of events were announced along with other social-distancing measures. Transaction volume dropped by 10% - 20% for most of the next week. The downward trend continued into the 40% range, reaching a low point on Saturday, March 28th with 64% fewer transactions per store than the same day of the prior year.

The last 10 days (aside from Easter Weekend) have seen noticeable improvement compared to the prior couple of weeks with year-over-year drops ranging from 20% - 30%. On Wednesday, April 15th, perhaps spurred by stimulus money, transactions per store were nearly identical to the prior year – just 1% below 2019 levels.

From what we've seen thus far, the end of March may very well have been the low point for reduced consumer spending in specialty retail stores. Hopefully, restrictions and guidance will begin to be appropriately eased, and consumers will return to more normal spending levels. 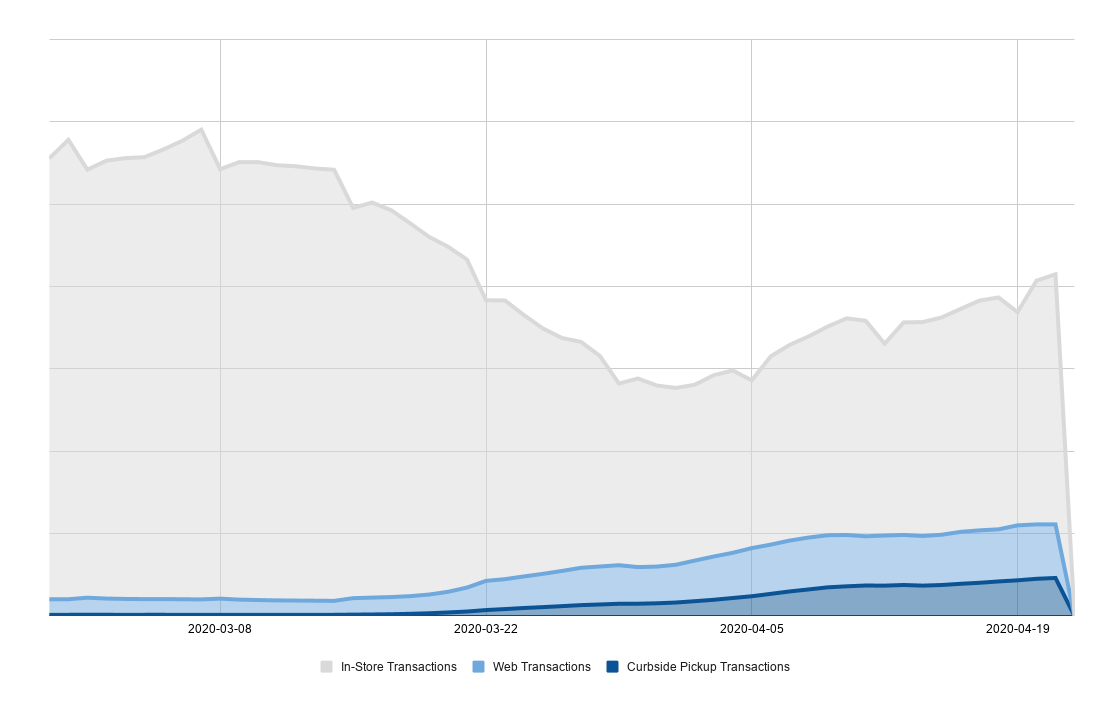 The Brick-and-Mortar Store Transactions chart (above) shows the average number of transactions per store across Rain’s thousands of specialty retail clients broken down by in-store transactions, web transactions, and curbside pickup transactions (originating on the web).

April 22, 2020:
We can see from this chart that brick-and-mortar store transactions dropped in half from the middle of March to the end of March. April has seen steady improvements, and half of the transaction volume losses have been regained. 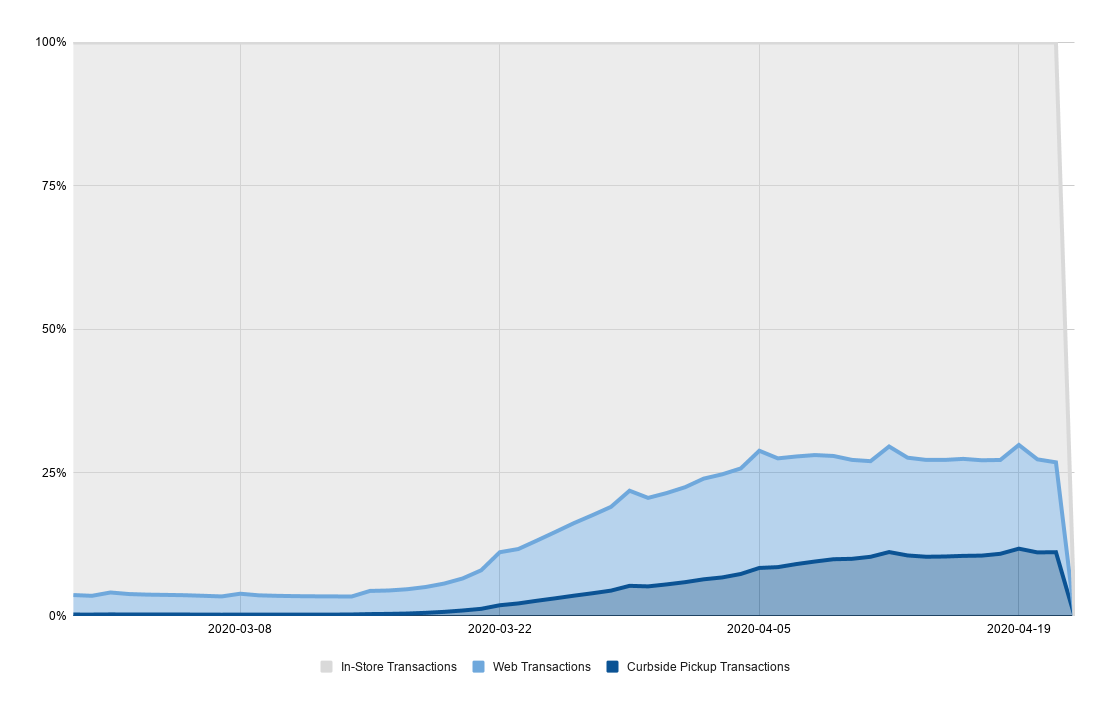 The Makeup of Brick-and-Mortar Store Transactions chart (above) shows the average makeup of transactions per store across Rain’s thousands of specialty retail clients.

What you can do
Set Up Key Features & Services
Set up Touchless Services
New Curbside Pickup
feature now available
for all users
Continue serving your customers, while
protecting them, yourself, and your business.
Set up delivery services
New
Local Delivery +
Zip Code options
for all users
Helping both you and your
customers to stay engaged
and safe.
Get set up online
Get a new website
in 7 days
Our experts are ready to help you take
your business online.
Make a Difference
Help those in need
Sew Masks 4 Heroes
Join us as we help sew mask covers
for healthcare providers in need
all over the country.
Get Tips & Insights
Coming Soon

Our new E-commerce &
Marketing Academy will be
available for all users
Get advice and tips from our experts.
Stay Informed
COVID-19
CDC Center for Disease Control and Prevention
WHO World Health Organization
Financial Times for COVID-19 statistics & trends
Resources for Small Businesses
SBA Small Business Administration
CO Chamber of Commerce
Contact your local SCORE Office
How can we help?
Please share with us any questions, suggestions, or stories
about your experience. We’d love to hear from you.
Privacy Policy